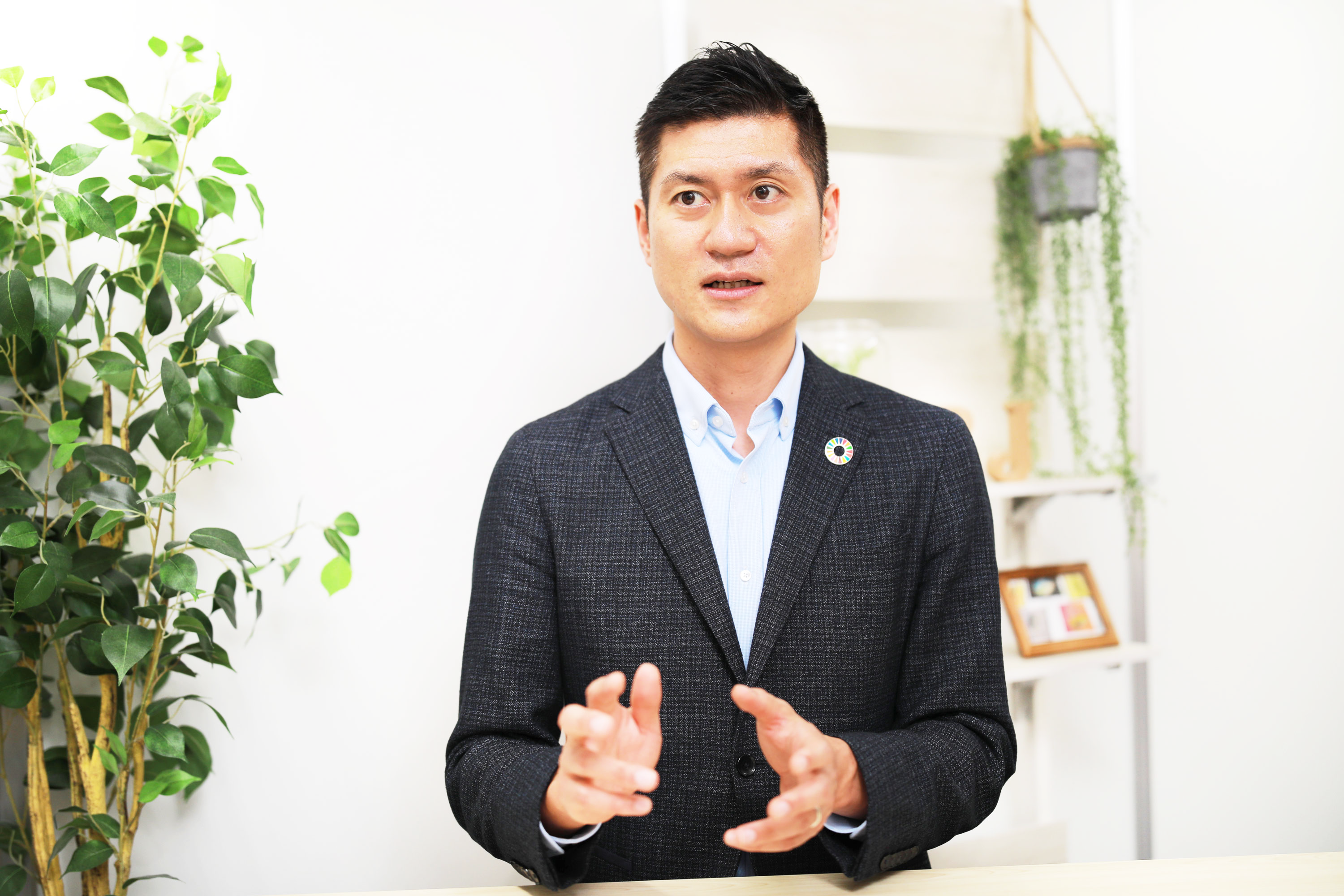 In 2015, then-Prime Minister Shinzo Abe’s cabinet set out a policy “to build a society in which all 100 million people can play an active role,” with women’s social advancement as one of its main pillars. The problem of daycare centers has posed a significant challenge in their attempts to reach this goal. The issue was that child-rearing women were unable to work, even if they wanted to because they were unable to pass the screening process for daycare admission. Their heartbreaking cries, which they posted on anonymous blogs, quickly swept the nation.

Since then, six years have passed. The number of children on waiting lists gradually decreased as the number of licensed childcare centers increased, largely due to local government’s efforts. As of April 1, 2021, the number of children on the waiting list had dropped to 5,634 (-6,805 from the previous year), the lowest number in three years. Looking at the numbers alone, it appears that Japan’s child-rearing environment has made significant progress towards the government’s goal of building a “society where women shine.”

But “The truth is there are serious problems that are causing headaches for people who work in childcare centers,” said Mr. Koji Ueno, president of BABY JOB Inc. and director of Nukumori no Ouchi(House of warmth) Childcare Co., Ltd. which operates approximately 50 daycare centers nationwide.

Mr. Ueno said, “Disposable diapers are essential for children between the ages of 0 and 2 to stay at a daycare facility. And in many cases, parents must prepare them. Parents must write their child’s name on each diaper to make it easier for the childcare staff to handle, and they must take the used diapers home.”

There are already a lot of things to prepare, especially for an infant. Working parents also have to carry work-related baggage, and even more, if they go grocery shopping. Carrying used diapers in a bag is cumbersome and unhygienic, and the burden on the day-care center staff is heavy as they have to store and manage them. Daycare centers, which are supposed to support child-rearing and women’s advancement in society, have turned into incredibly stressful places. To solve this problem, BABY JOB Inc. jointly developed the service “Let’s go to daycare with empty hands” with Unicharm Corporation. This is Japan’s first subscription-based diaper delivery service, in which parents pay a fixed monthly fee, and diapers and wipes are delivered directly to the childcare facility. The diapers can be used as much as needed, regardless of the sizes. Parents no longer have the burden of preparing diapers and writing their child’s name on each one. It also relieves childcare staff of the responsibility of managing individual diapers, thereby resolving the problem for both parents and childcare staff.

In 2020, this service was awarded the Grand Prix in “Japan Subscription Business Awards 2020” and the number of users instantly grew. The service has met great expectations from all quarters that this will contribute to the development of a better social system.

Mr. Ueno took an advanced course in high school that focused on admission to a national science university. However, he decided not to continue his education after high school because “I couldn’t see what I wanted to do in the future.” Instead, he went on a working holiday to Australia for a year. Through interactions with various people, he realized he wanted to pursue a “career working with people” and began to form the seeds of an idea for starting a business.

“I had frustrated my parents by doing what I wanted for a year,” Mr. Ueno explains, “so I enrolled in a night course at university to study business administration while working during the day.” He taught a computer class using the programming skills he learned from his father, who was a programmer. When he was a junior in university, he started his own programming tutor business.

“I considered continuing my entrepreneurial career, but an entrepreneur I knew advised me, ‘Since you are a new graduate, you should join a large company and learn how the upstream process is performed.’ So, I began looking for work in IT firms, consulting firms, and major manufacturers.”

He chose to work for Unicharm Corporation, a renowned manufacturer of sanitary products such as sanitary napkins and disposable diapers, where he later became a business partner. He began his career with the company in 2003 as a sales representative, and in 2009, he served as the overseas director in the Global Marketing Department for a year. Then, while in charge of recommendation sales, in which he sold products while demonstrating them at a children’s specialty store, he noticed that housewives outperformed other female salespeople dispatched from the staffing company.

“The children’s specialty store was frequented by new mothers and expectant mothers who were about to give birth. Experienced housewives (mothers) gave customers advice and introduced the products to customers, so they were quite persuasive. Then, I thought, ‘Why don’t I start a temporary staffing service company that only hires mothers!’” 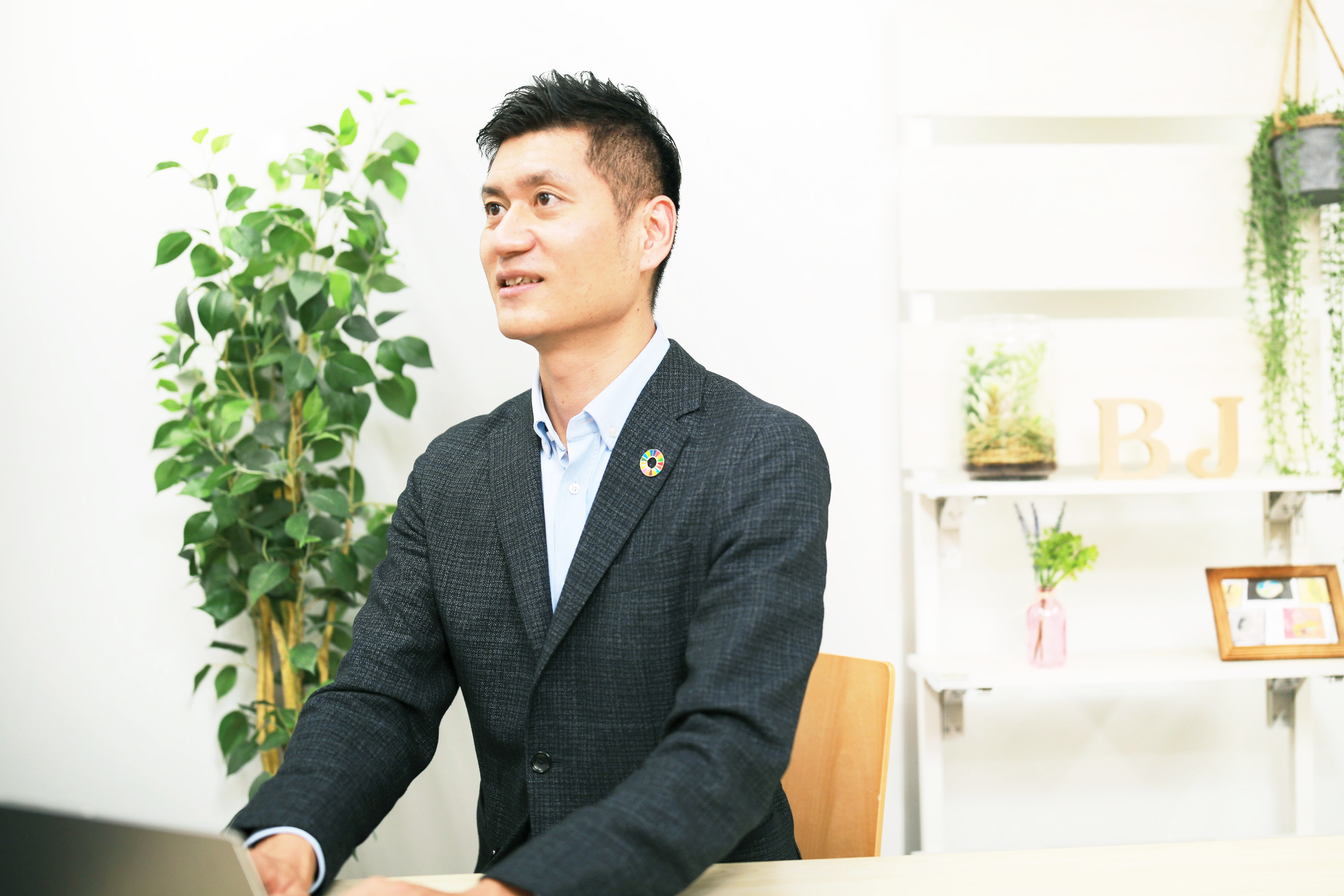 In 2012, Mr. Ueno founded SSM (Super Strong Mother) Co., Ltd., fulfilling the long-cherished dream he had had since he was a student. Initially, the company envisioned a human resource service business that would “harness the power of mothers to benefit society.” However, as Mr. Ueno conducted additional market research, he discovered that mothers were unable to work in the first place because they were unable to leave their children at daycare centers due to a lack of childcare facilities and the resulting waitlist.

Mr. Ueno became convinced that “If only there were daycare centers, mothers could work,” and he set out to open a daycare center. During his involvement in the operation, he realized that daycare centers, which are meant to help working mothers, placed far too many demands on the parents.

“One of them was to prepare and take home diapers. Specific requests and requirements were also made for items such as baby food, daily laundry, and bedding. Working mothers were overwhelmed by the enormous amount of extra work they had to do, rather than being relieved by enrolling their children in daycare.”

“If daycare centers do not change,” Mr. Ueno believed, “there will be no society where everyone can work energetically.” Then, when Unicharm Corporation approached him about establishing a new sales channel in the childcare market, he had a lightbulb moment. It was the perfect time for the agendas of the two companies to coincide. Mr. Ueno combined his company’s parent payment and inventory management system with Unicharm Corporation’s product capabilities and nationwide delivery network, the prototype for the current “Let’s go to daycare with empty hands” system. Then, in 2018, Mr. Ueno made a new start with a two-pillar business approach by establishing Nukumori no Ouchi(House of warmth) Childcare Co., Ltd. and BABY JOB Inc.

Corporate Mission: Create “A Society Where Everyone Finds Child-Rearing Enjoyable”

In 2019, Mr. Ueno launched a prototype of “Let’s go to daycare with empty hands,” Japan’s first diaper subscription service for daycare centers. At that time, people’s awareness of the service was low because it was a brand-new one that had never been offered before. Even when employees tried to promote the service to childcare facilities, they were ignored. Employees struggled to schedule appointments, with an appointment rate of no more than 1%, or one appointment out of every 100 phone calls.

Mr. Ueno was able to overcome this problem in 2020 when BABY JOB Inc. won the Grand Prix in “Japan Subscription Business Awards 2020.” The service received extensive media coverage, and people’s awareness of it skyrocketed, resulting in a significant increase in the number of users. The number of users increased from 200–300 at the beginning of the service to 6,000 in April 2020. As of 2022, the service is being used by more than 30,000 preschool children at over 2,000 facilities across the country. “However, there are about 40,000 childcare facilities across the nation, and only 5% of them have adopted our service. We’d like to see an increase in the number of people who use it. To achieve this, we must overcome many obstacles,” said Mr. Ueno, looking ahead to his business future.

“Our corporate mission is to create a society where everyone finds child-rearing enjoyable. To begin with, child-rearing is supposed to be an enjoyable experience. With women’s advancement in the workforce, society has been changing rapidly, but individuals do not consider each other, but people’s minds are sticking to old common sense and stereotypes. And I believe this is impeding the creation of a social structure that is appropriate for the new era. Our goal is to eliminate these obstacles one by one to create a society where everyone finds child-rearing an enjoyable experience. One way to achieve this is through our ‘Let’s go to daycare with empty hands’ initiative. In addition, we are planning to introduce more services in the future.”

Always and Forever, What Supports Me Is My Strong Passion to Change Society for the Better

In 2021, Mr. Ueno raised 500 million yen in new funding. He said he wants to accelerate the growth of his services by strengthening his business and management foundations as soon as possible.

“What we want to get from our fundraising is speed. With Japan’s severely aging population, the government’s policies will primarily favor actions aimed at an aging population. While the issue of child-rearing is receiving attention, we want to remove inconveniences for society with our services as quickly as possible. We plan to increase the current adoption rate of 5% for our ‘Let’s go to daycare with empty hands’ service by daycare centers across the country to over 70% in the next 3 to 5 years.” In June 2022, BABY JOB Inc. launched a search website dedicated to finding daycare centers to make it “easier and more convenient” for parents who are busy raising children to find daycare facilities across Japan.

With a current shortage of daycare centers and long waiting lists, daycare centers do not need to advertise because they can attract children from the surrounding community. As a result, many daycare centers still do not even have a website, and very little information is available on the Internet. However, as the birthrate declines, daycare centers may not be able to fill their capacity. If this website takes off, it will be a great opportunity for daycare centers to promote their facilities while also giving local governments clues on how to improve their social infrastructure. It is truly a “win-win” platform.

Whether it’s a diaper subscription service or a website for finding a daycare center, Mr. Ueno’s strong desire to “improve society” can be found in all of his projects.

“The services provided by public institutions are inevitably focused on the majority. That is why I believe my company’s raison d’être is to give comprehensive support to minorities and create welfare services that do not leave anyone behind. And I’d be grateful if, as a result of our services, everyone becomes more aware of the issues that face society and hopefully that results in a small shift in everyone’s awareness,” said Mr. Ueno.

―Toward a society where all people find child-rearing enjoyable―――――――――
With this aspiration in mind, Mr. Ueno’s challenge continues to grow from Japan to abroad. 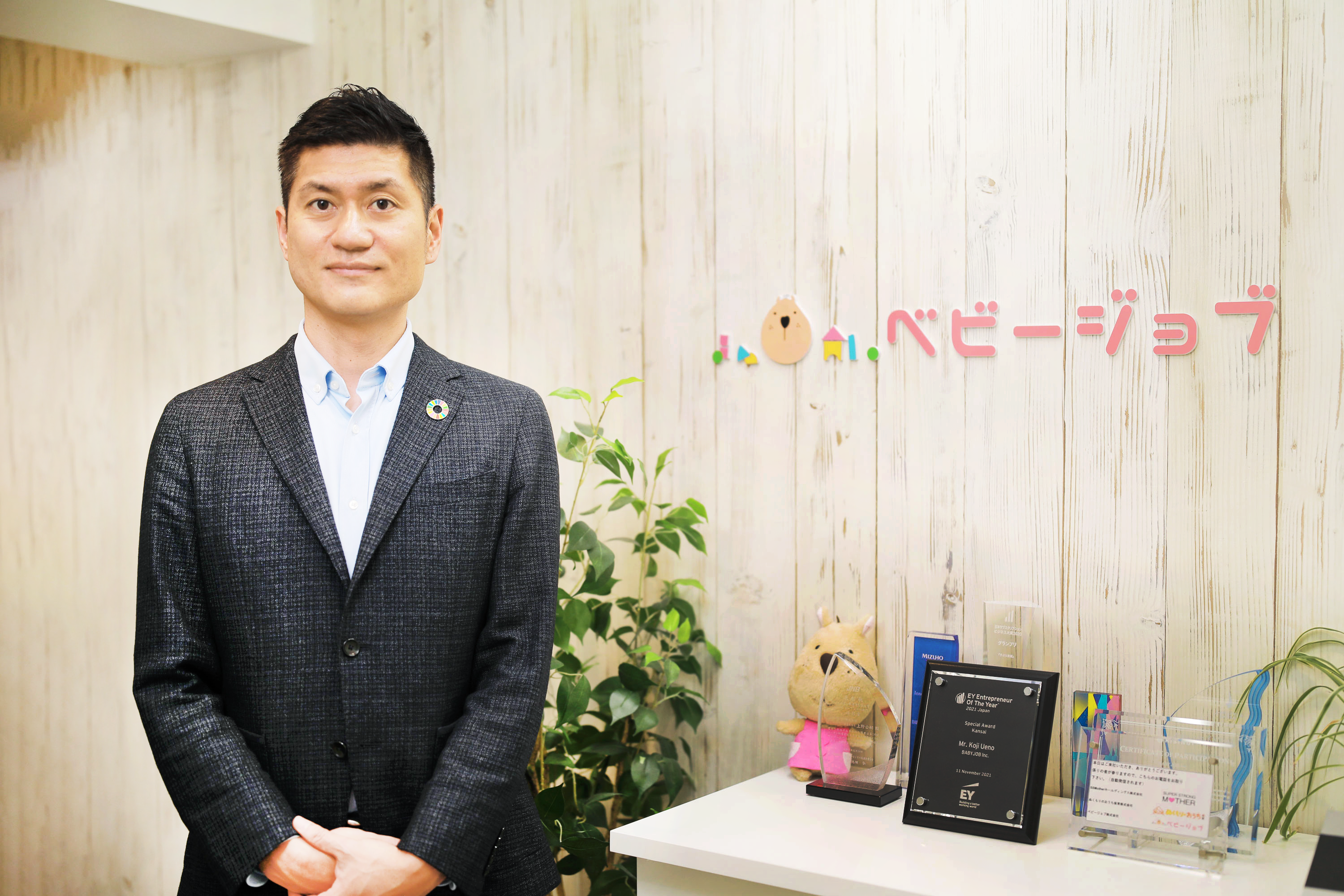