Using Microwave Technology to Create a World We Have Never Seen 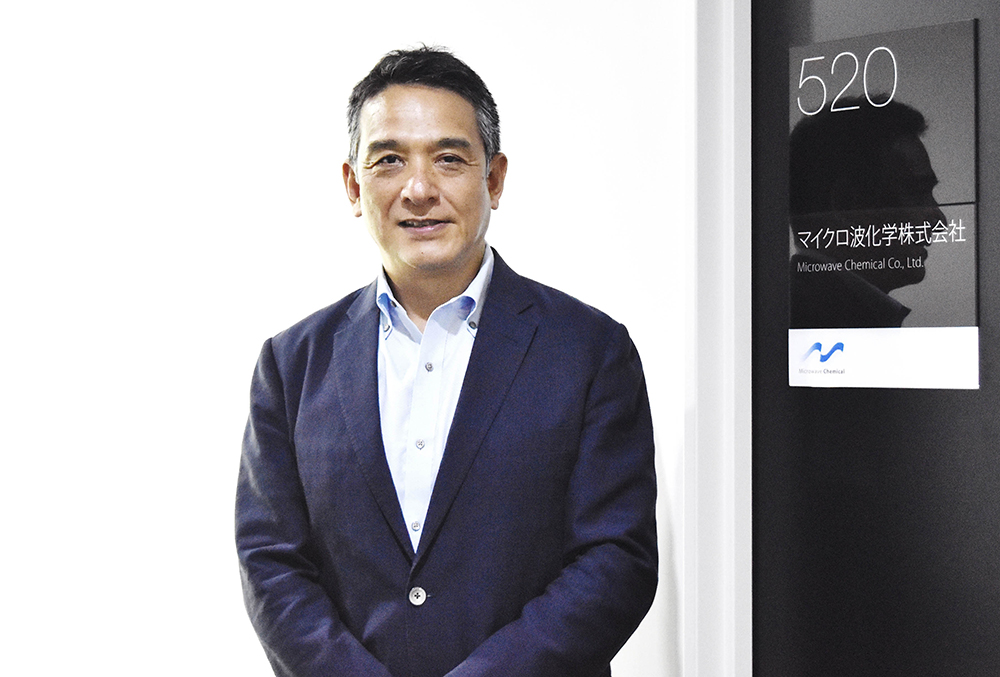 The aim: Driving innovation in the chemical industry with microwave technology

The chemical industry has supported economic development by supplying raw materials to a wide variety of other industries essential to our daily lives, including automobiles, home appliances, clothing, and pharmaceuticals. However, smokestack industries have not seen significant innovation for over a century.

The mission of Microwave Chemical Co., Ltd. is “Make Wave, Make World. Create a world we have never seen.” With its novel technology using microwaves – also used in microwave ovens – the company aims to transform the chemical industry and bring innovation to the world of manufacturing. The company’s development base is at its headquarters and laboratory within Osaka University in Suita City as well as at the world’s first large-scale microwave chemical plant in Suminoe Ward, Osaka City.

In legacy manufacturing processes in the chemical industry, energy is transmitted from the outside, indirectly, to all of the substances concerned. However, microwaves employ the exact opposite means of transmitting energy – from the inside, directly, and only to specific substances.

CEO Yoshino explains that “introducing microwave technology improves manufacturing processes so much that – compared to legacy methods – energy consumption can be reduced to 1/3(*), heating time to 1/10(*), and plant area to 1/5(*). Our technology can also contribute to cost reductions, new materials development, and achievement of carbon neutrality.”

(*Figures are estimates for fatty acid ester manufactured at our plant in Suminoe Ward, Osaka City) 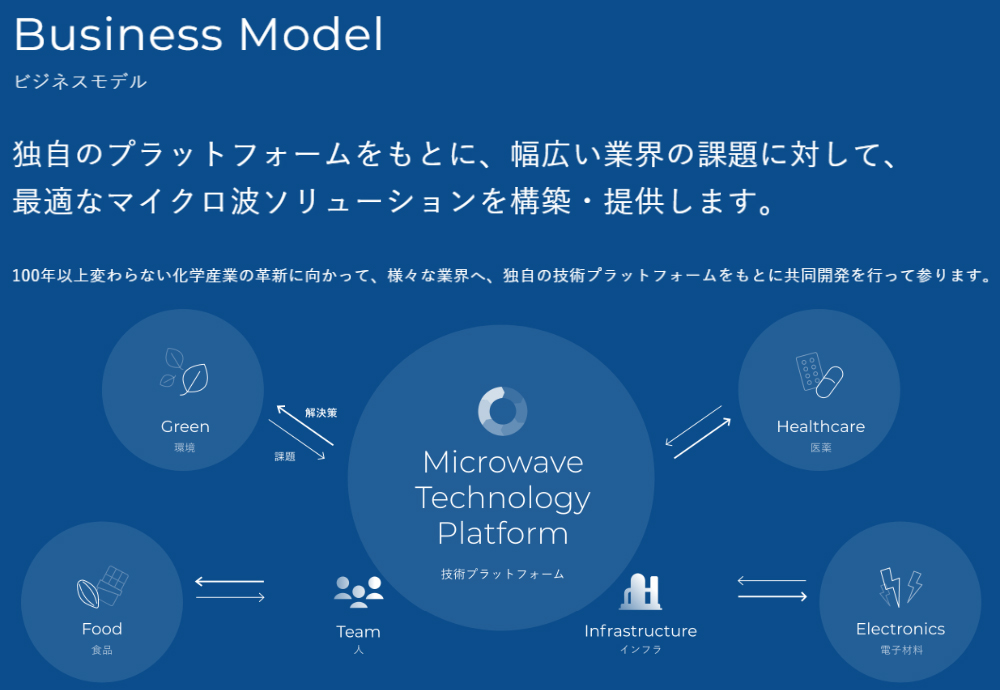 The company uses its unique platform to develop and provide optimal microwave solutions for a wide range of industry issues. Aiming to bring innovation to the chemical industry – which has not fundamentally changed for more than 100 years – the company leverages its platform into joint development across various industry sectors.

Since its founding in 2007, the company has been working to commercialize microwave processes – which have been considered difficult to scale up to be industrial – and established a platform for microwave technology. Currently, the company is partnering with manufacturers and institutions both in Japan and overseas across a wide range of fields, including pharmaceuticals, electronic components, and foodstuffs. Microwave Chemical Co., Ltd. has leveraged its in-house technology platform to now develop and provide total solutions from research and development right through to engineering, and, in June 2022, conducted an IPO on the Growth market of the Tokyo Stock Exchange.

Leaving a major trading company to study at business school in the U.S.A., where the entrepreneurial culture is deeply rooted

Born in Osaka, at high school and college Yoshino poured his efforts into playing American football. When job hunting in 1990 – during the bubble economy era – he aimed to join a trading company that would enable work abroad, ultimately being hired by leading mercantile firm Mitsui & Co.

Yoshino was assigned to the Chemicals Division, where he was mainly responsible for petrochemical products trading. Based at the trading center in Tokyo, it was an interesting job that enabled staff to exercise their discretion, making large trades with everyone from large corporations to individuals. However, after ten years his priority shifted from an overseas transfer toward studying to change his career direction, so Yoshino decided to leave Mitsui. 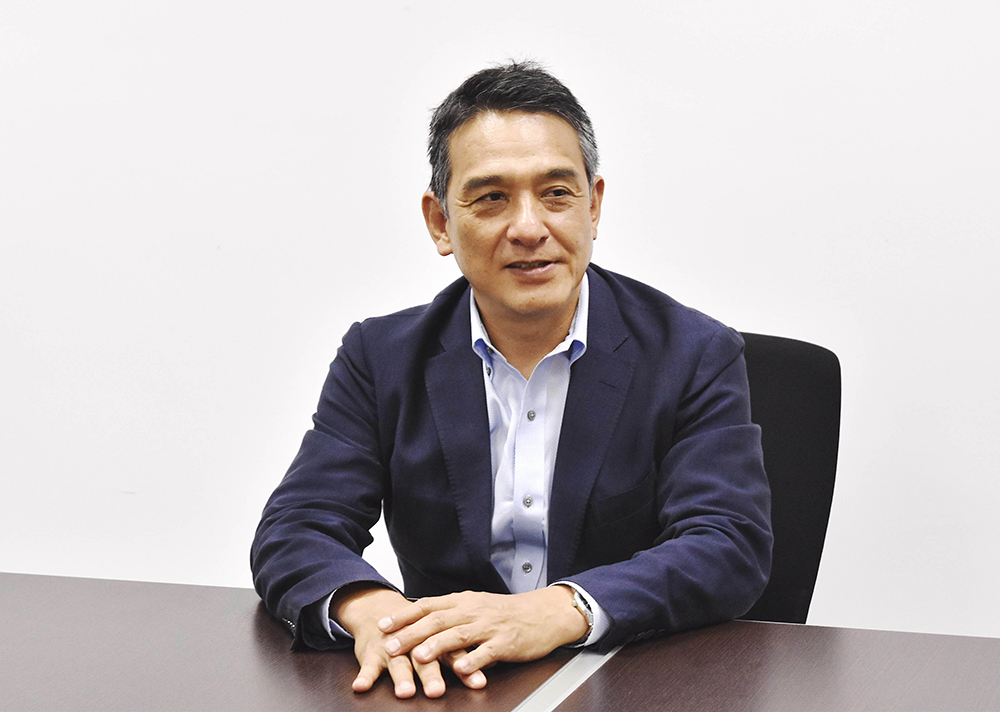 At his own expense, he embarked on an MBA at the University of California, Berkeley. Berkeley, a hotbed of entrepreneurial culture, is located close to Silicon Valley. At the time, Google was unknown in Japan, and Alibaba was still a small operation. As he studied for his MBA, he witnessed how venture companies make an impact on the world by commercializing new technologies and services, and Yoshino came to embrace this challenge himself.

One of the most exciting aspects of venture company culture to Yoshino was how individuals were empowered. That is to say, he was struck by how individual employees demonstrate their abilities, make critical decisions themselves, and then act on their own initiative.

In the petrochemical products trading sector, there were people who bought and sold as individuals, not as part of a company. He witnessed many situations in which a trade only happened because of the abilities of the person concerned, coming to think that even small organizations and individuals have a lot of potential, and in fact they can likely achieve great things with more agility.

Yoshino decided to work in the U.S.A. after graduating from business school. It took him six months before he found a job at a Seattle firm that supports environmental and energy venture companies. Through helping with business development in Japan and the United States as well as conducting research on venture companies, he gradually became interested in the environment and energy fields and began to think “can I make a difference to these big issues?

“There is nothing wrong with making money. Earning money by providing value in the right way leads to making things happen and solving issues.”
The words of Yoshino’s boss at the trading company always stuck in his mind. Yoshino felt that business-based solutions are the optimal way to create the environment everyone wants, blessed with pure water and clean air.

The turning point came in 2006, after he returned to Japan. A friend introduced him to Yasunori Tsukahara, a microwave researcher at Osaka University’s Graduate School of Engineering. Mr. Tsukahara became the co-founder of Microwave Chemical Co., Ltd. Through meeting a like-minded spirit who was more serious than any researcher he had met – and who wanted to change the world through seeds created at university – Yoshino’s desire to make an impact on the environment and energy industry through business as well as to bring innovation to the chemical industry became unshakable. 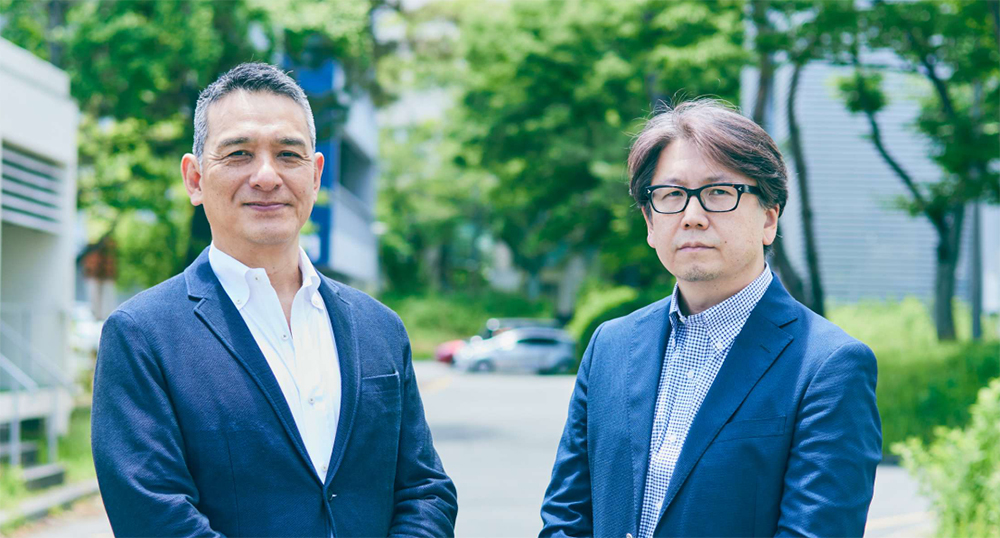 In 2007 – the year after global crude oil prices increased suddenly – they established a company to produce biodiesel from waste oil using microwave technology. The company intended to manufacture biodiesel on-site using waste oil from chemical and food plants and sell it from the factory gate, but in a conservative field such as manufacturing, a new concept like microwave technology was not easily accepted.

In addition, the Global Financial Crisis meant the company was unable to raise funds, and was fortunate to receive a grant from NEDO(New Energy and Industrial Technology Development Organization). However, in order to apply as much of the precious grant money as possible to research expenses, Yoshino sometimes took on side jobs to cover his living costs.

The company then pivoted toward producing biodiesel itself, but commercialization was slow. This led to the realization that the only way to prove that microwaves are an effective technology is to build our own microwave chemical plants. Investment was received from UTEC (University of Tokyo Edge Capital), and a large-scale plant in Suminoe Ward, Osaka City was completed in 2014.

Yoshino recalled that “The hardest part was to prove that something with no track record did in fact have value. In IT, you can build a program, try it out, then fix any problems. But you can’t do that in manufacturing. It would be terrible if someone got hurt, so we can’t sell something until it’s a finished product. Procuring funds is of course important, but successful delivery required the combined abilities of various specialists such as researchers, engineers, and production managers.”

“When I studied in America, the IT bubble was at its peak, but I wasn’t really interested. The IT industry is fiercely competitive and there are many people you’d call a genius. On the other hand, I felt there are still many possibilities to create technology platforms in manufacturing. I believed I could apply my experience at the trading company in this field.”

It’s important when starting a company to think about how you can use your interests and abilities to improve the chances of success.

“The fact that we were able to create a unique technology platform is due in large part to the environment in Japan, which emphasizes taking the time to gradually build things up. In the United States, I think the company might have gone bust three times (laughs).” 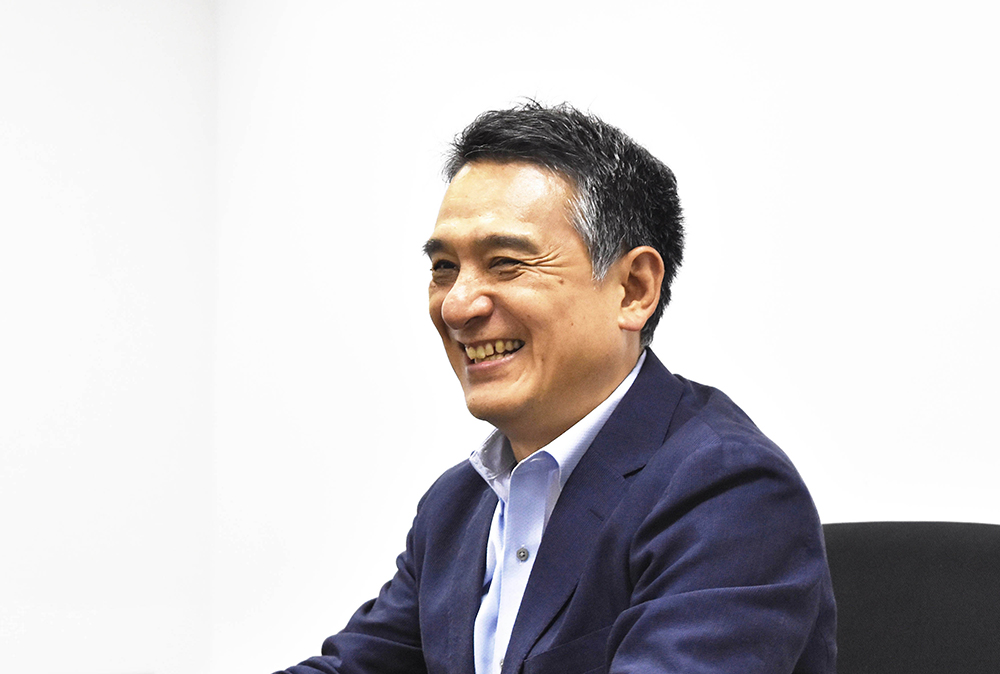 After some trial and error, the company settled on its current business model; instead of selling products, it would sell to manufacturers the process of production using microwaves. The growth enabled by this change culminated in – in June 2022 – Microwave Chemical Co., Ltd. conducting an IPO on the Growth market of the Tokyo Stock Exchange.

Yoshino explains that “electric-powered manufacturing is said to be the key to carbon neutrality. With our company’s microwave technology platform now mature, this is the perfect time for an IPO.”

It is important that we grow the company and increase sales in order to build businesses that contribute to the improvement of the environmental and energy fields – as well as innovation in the chemical industry – in the future business environment. We therefore plan to build on the IPO to further expand the business and recruit human resources.

All experience is beneficial, and it’s critical to test in practice what you’d like to try

Yoshino recalls that “conducting an IPO took 15 years after founding the company, which is longer than we originally thought it would. Even though we were about to run out of money, we knew we had to face our difficulties head on, consider pivoting direction, and just find a way forward to reach a conclusion.”

He explains that to start a business, it is important not to forget the distant goal, i.e. the mission you have laid out. “As you pivot direction little by little, your perspective always becomes narrower. In such situations, you need to steer toward that distant goal.”

When asked if he felt a lot of stress when the business did not make progress and the difficulties were ongoing, Yoshino replied with a smile that “I’m able to choose to do what I like doing, so I don’t have any stress. There was stress when I was working for the trading company though!”

Yoshino also offers words of encouragement to prospective entrepreneurs: “If you’re thinking of starting a business, I believe you should first test in practice what it is you’d like to try. Whatever the reason, people who are doers should get out there and do things. Even if you fail, that experience will definitely be a positive.”

Looking ahead, Yoshino wants to move to a location integrating research and business. The current headquarters at Osaka University reminds him of the environment at Berkeley, where he studied.

“It’s similar to Berkeley in the sense that a lot of companies are clustered around the campus, and people come and go freely. I believe that these invisible knowledge networks are drivers of innovation.”

The company’s mission is a lofty one: “Make Wave, Make World. Create a world we have never seen.” To drive its growth into the future, the challenge Yoshino has embraced will continue for some time yet. 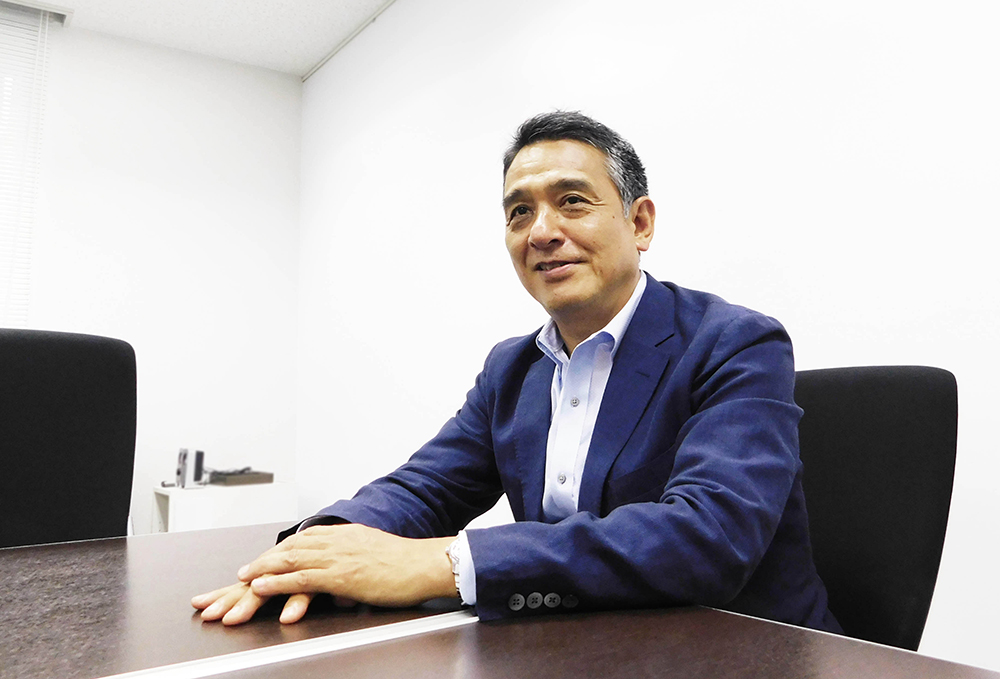