The battle was about to begin. A red square and a blue square flashed up on screen. Each framed the face of a competitor, both eager to prove that their startup company has what it takes. Beneath them a live feed revealed a boxing ring, where ringmaster Nathan Bryan, stood, conducting the combatants from afar. At his command, a bell sounded, and one competitor launched into a one-minute introductory pitch, aware that first impressions should pack a punch. 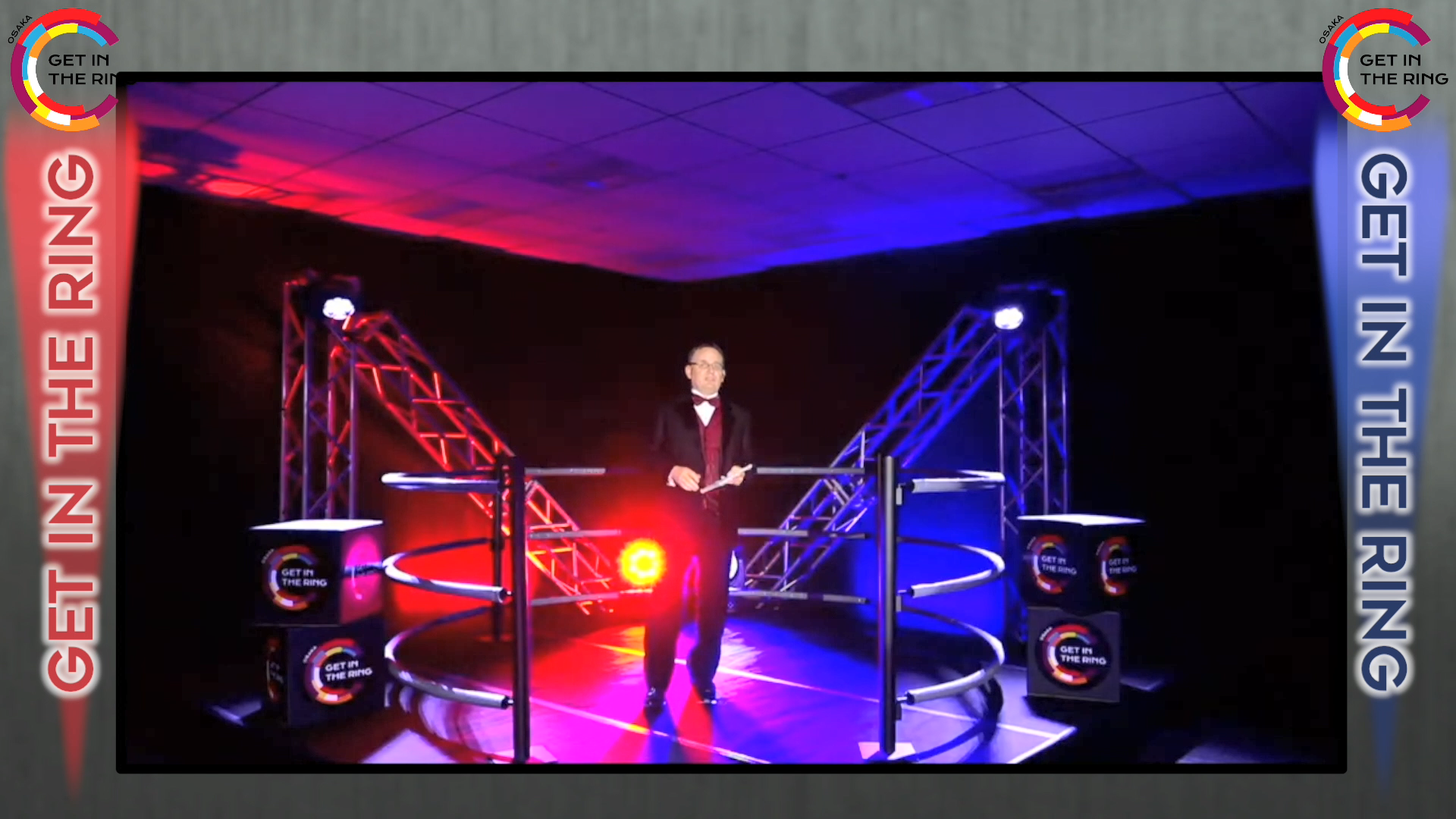 This was the first-ever virtual edition of Get In The Ring Osaka, which came out fighting against 2020 with an entirely online setup, streaming the event live on YouTube.

Get In The Ring is a global startup pitch event, which began in The Netherlands in 2012 and now sees over 150 events take place annually with more than 100 countries having hosted so far. Through battling out their ideas in a boxing ring, competitors test their business model and receive valuable feedback from industry experts. These regional winners will then get the opportunity to participate in the “GITR Global Meetup, where they will receive exclusive access to tailored dealmaking meetings with key partners.

Startups are divided into categories by company valuation and whittled down to just six finalists who enter the ring to battle it out head-to-head. They have one minute to introduce their company, followed by five 30-second rounds featuring Team, Achievements, Business Model & Market, Financials & Proposition and Freestyle, the wildcard round where participants can say anything they like to convince the judges, and even throw a jab at the other team.

For this GITR event, the AI-focused startups were not in for an easy ride. They faced a panel of seasoned judges: Tim Miksche, startup mentor, Japan Representative of the German Startups Association and founder of TransferNET; James Coleman, a frequent business competition judge with over two decades of advising in the tech sector; and Ryu Hirota, Principal at Spiral Ventures, where he overseas deal sourcing and growth of over 25 portfolio companies across Southeast Asia.

Each was on the lookout for different qualities, from value proposition and teamwork to the impact the business would have on the world. For the competitors, the key would be whether they could swing some counters to judges’ questions and ultimately knock-out their opponent with a business proposition that united these diverse criteria. 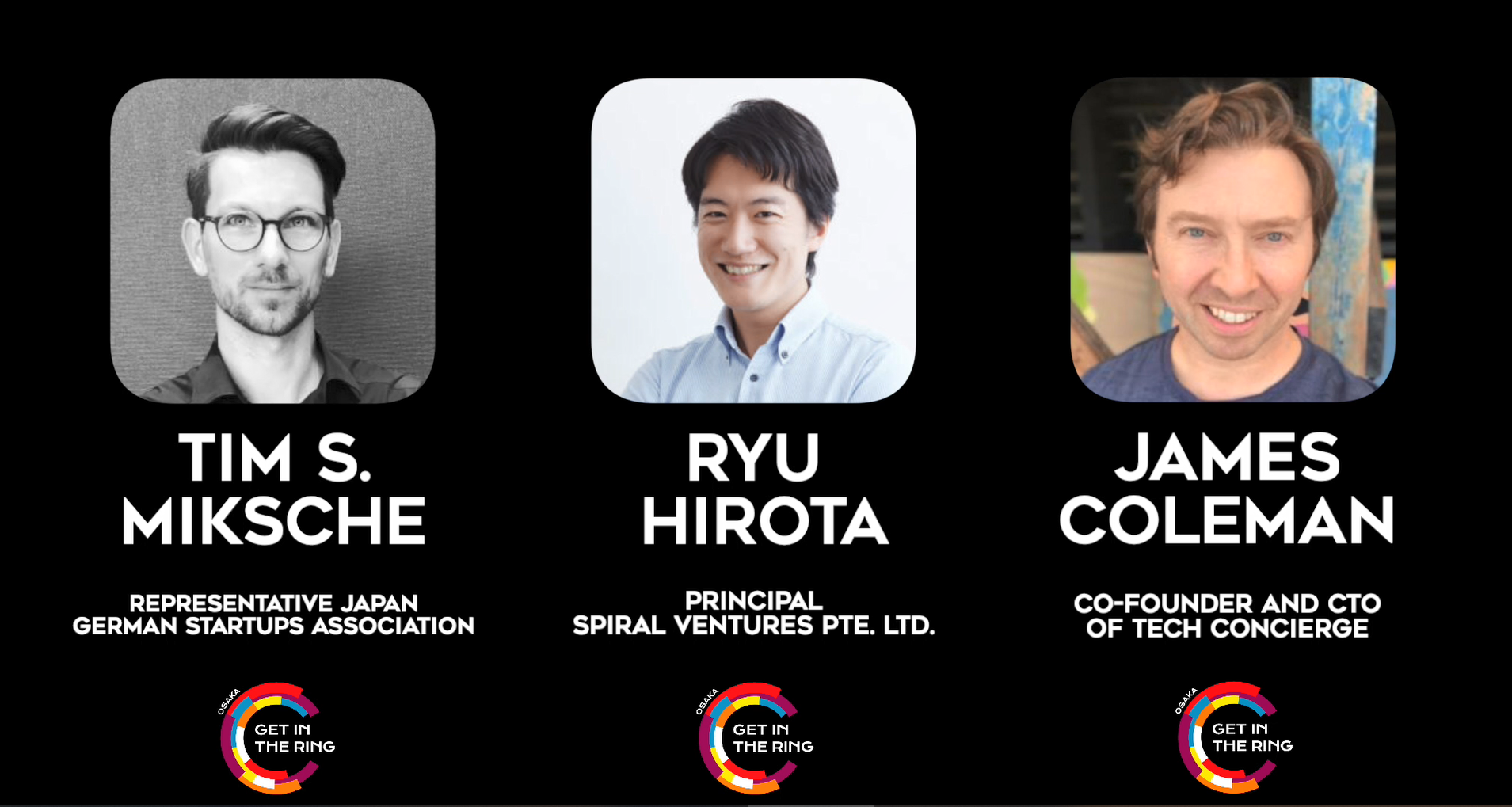 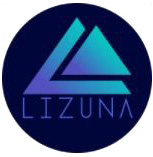 is a university startup that uses hyperspectral imaging and AI technology to detect cancer with a high level of accuracy. 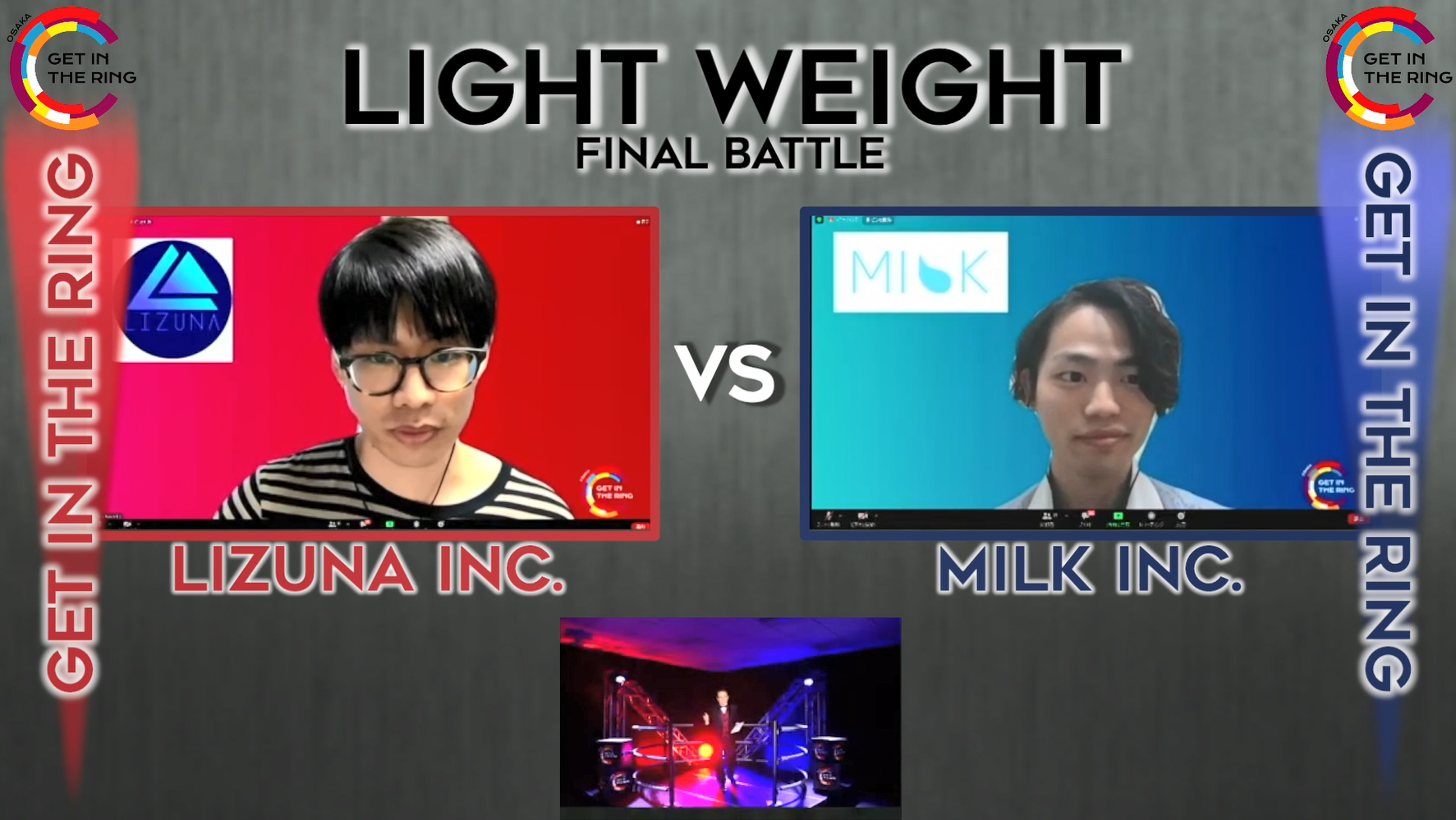 Kicking off the battle, Lizuna’s CEO Jason gave a succinct summary of his personal experience of becoming a victim of fraud as an ecommerce merchant, sharing some sobering statistics – for every $1 lost to fraud, ecommerce merchants lose $3 through lost product, lost time and other costs. Lizuna uses big data, data verification and AI in its system to quickly detect and analyze fraud. Pointing out Lizuna’s fast growth and revenue, Jason said they were looking to raise funds to build a sales team and hire a data engineer to enhance system accuracy, with the further goal of expanding beyond the Shopify platform, demonstrating the company’s growth potential.

Daiki from MILK played some confident counters, starting with the potential for MILK’s cancer detection system to revolutionize the medical field. He highlighted the impressive capabilities of the hyperspectral camera, which can detect subtle differences in color to accurately determine objects, and is currently used by NASA to detect vegetation coverage. MILK is developing accompanying AI software, which is already achieving cancer detection accuracy rates of 90% or greater. Daiki said the goal is to introduce the system into hospitals across Japan from 2022, with the potential for sales of more than 700 million dollars, assuming 1000 hospitals adopted it.

Ultimately, though, the judges came down in favor of Lizuna, with Ryu noting that its potential for scalability was very attractive. For MILK, all judges noted the subscription-based business model needed some work, with concerns that medical regulations may hamper progress. Yet, its potential for good didn’t go unnoticed. “You can change the world,” Jason told Daiki. “Please keep competing. 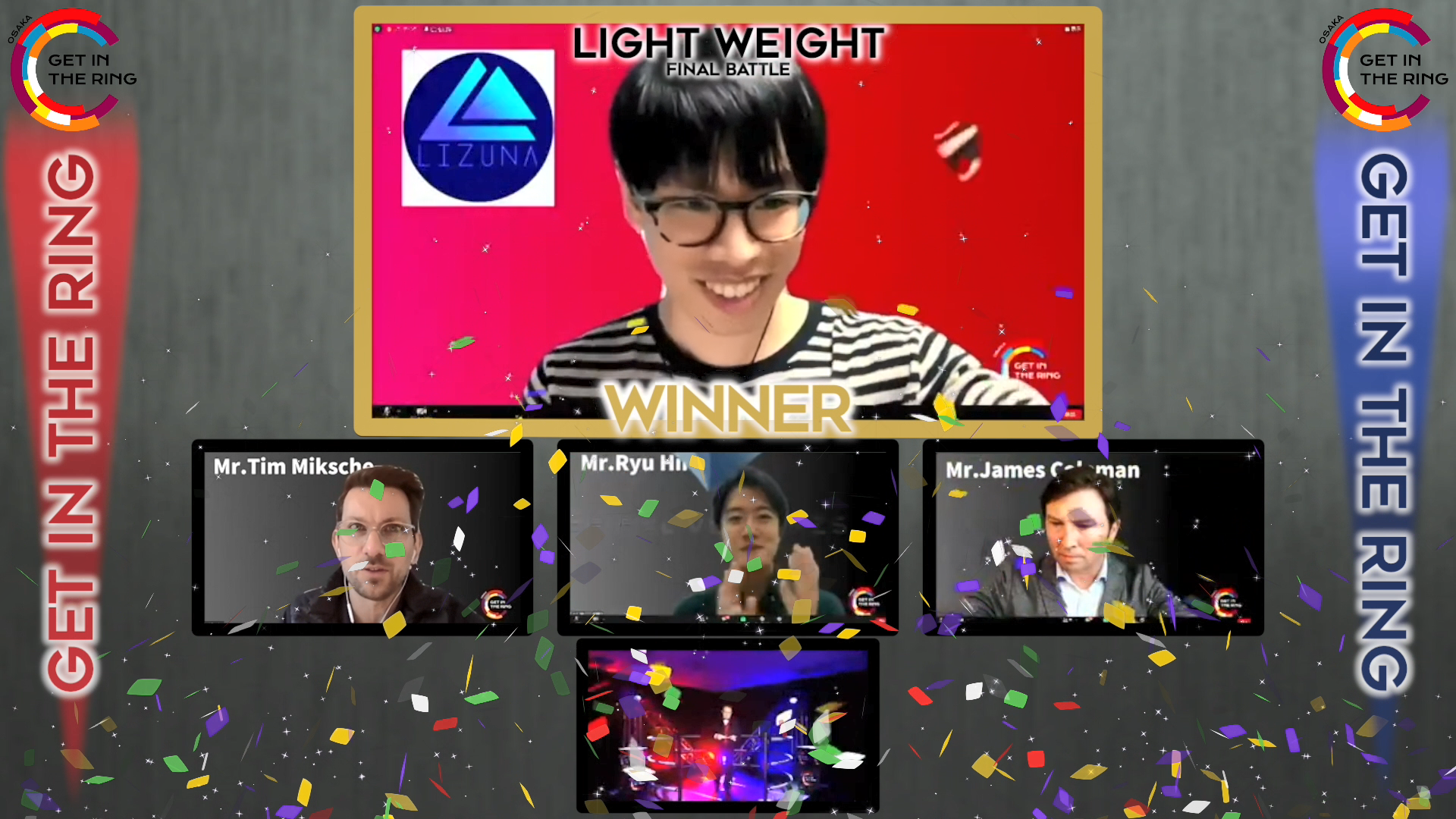 “I am shocked and honored. We have been working very hard for the past three years and starting up a company in Japan as a foreigner is not easy. I want to thank everyone. […] We’re getting ready to raise our seed funding next year. We have been able to gain a lot of traction this year, so we are really ready to sit down at the table and start speaking to investors. Hopefully, we can close the seed round very quickly, and then get back to working very hard, gaining more traction… and take over the world!” – Jason Sio, CEO 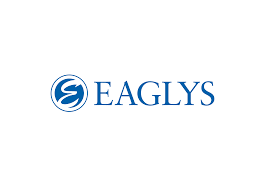 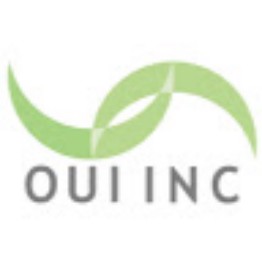 has developed a smartphone camera for remote and early diagnosis of eye issues with the goal to reduce blindness worldwide. 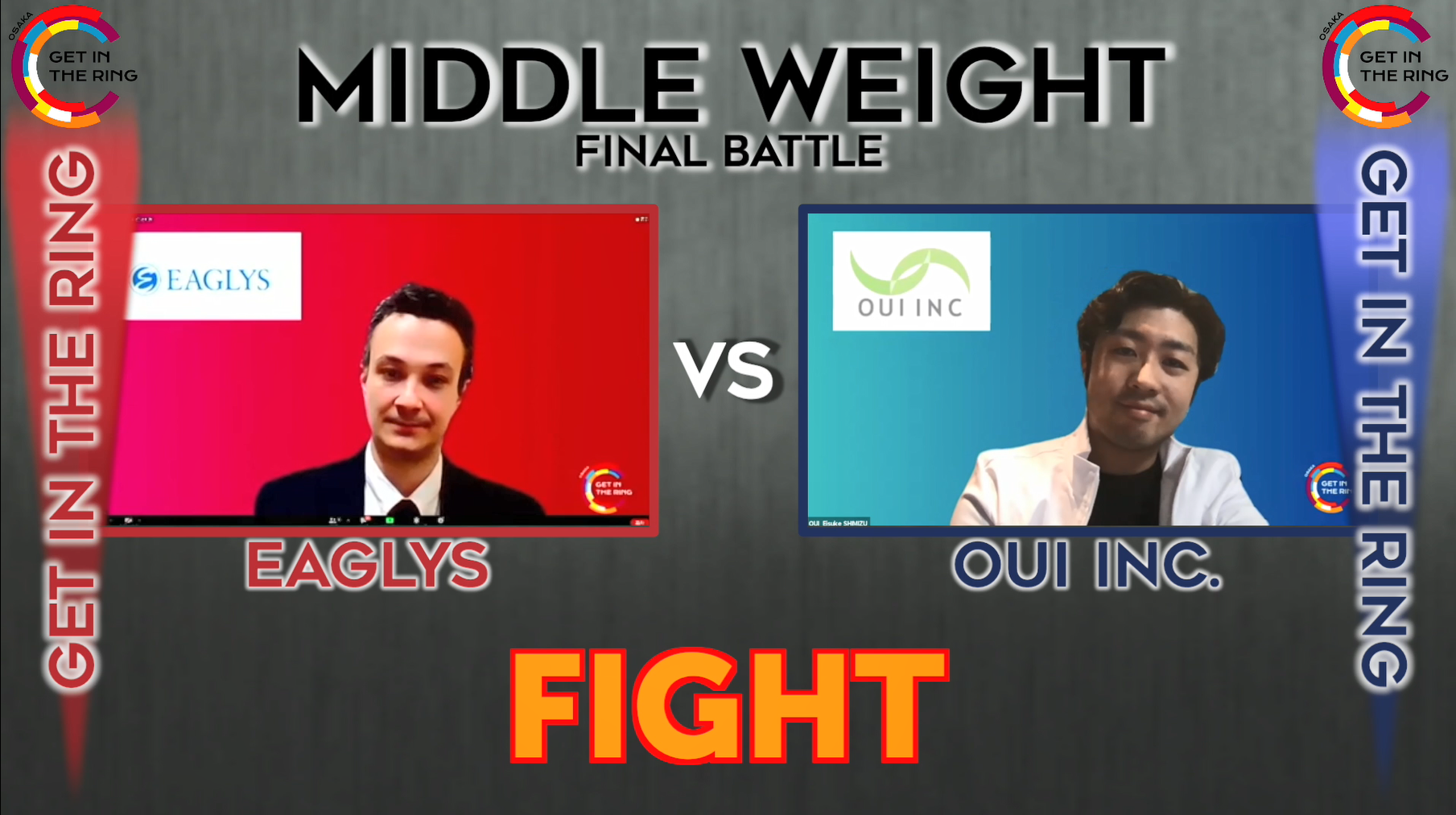 Striking out first, Michal from EAGLYS laid out the scope of the big data market, saying it was projected to reach 350 billion dollars within the next couple of years. He positioned EAGLYS as the bridge that could allow effective use of their data while reconciling privacy and confidentiality concerns. Through providing AI models that operate over always-encrypted data, the data doesn’t get decrypted until the end of the transfer, protecting the information while allowing knowledge sharing. First to market with their database encryption product, they already have several contracts with large publicly traded companies and recently surpassed one million dollars in revenue. Their next move is to focus on the EU/US markets, leveraging the legislative environment that supports their business model.

Fighting back was OUI Inc.’s Eisuke with the bold and admirable goal of reducing blindness by 50% in 2025 through quick and easy diagnosis using their Smart Eye Camera (SEC) iPhone attachment. The Keio University startup proposes a hybrid model targeting general consumers through selling SEC devices alongside a subscription service for diagnosis. They have already received backing from the Japanese government and they are moving to roll out the diagnostic system online under the Japanese health insurance system. “Reducing blindness not only allows patients to see better,” said Eisuke, “but it allows them to get back to their daily lives and participate more fully in society.”

When it came to judgment, EAGLYS was crowned winner, with Tim noting its strong potential for scalability due to the universal necessity for secure data. Yet the judges also had words of praise for OUI Inc., encouraging Eisuke to further flesh out the business model and market strategy going forwards. 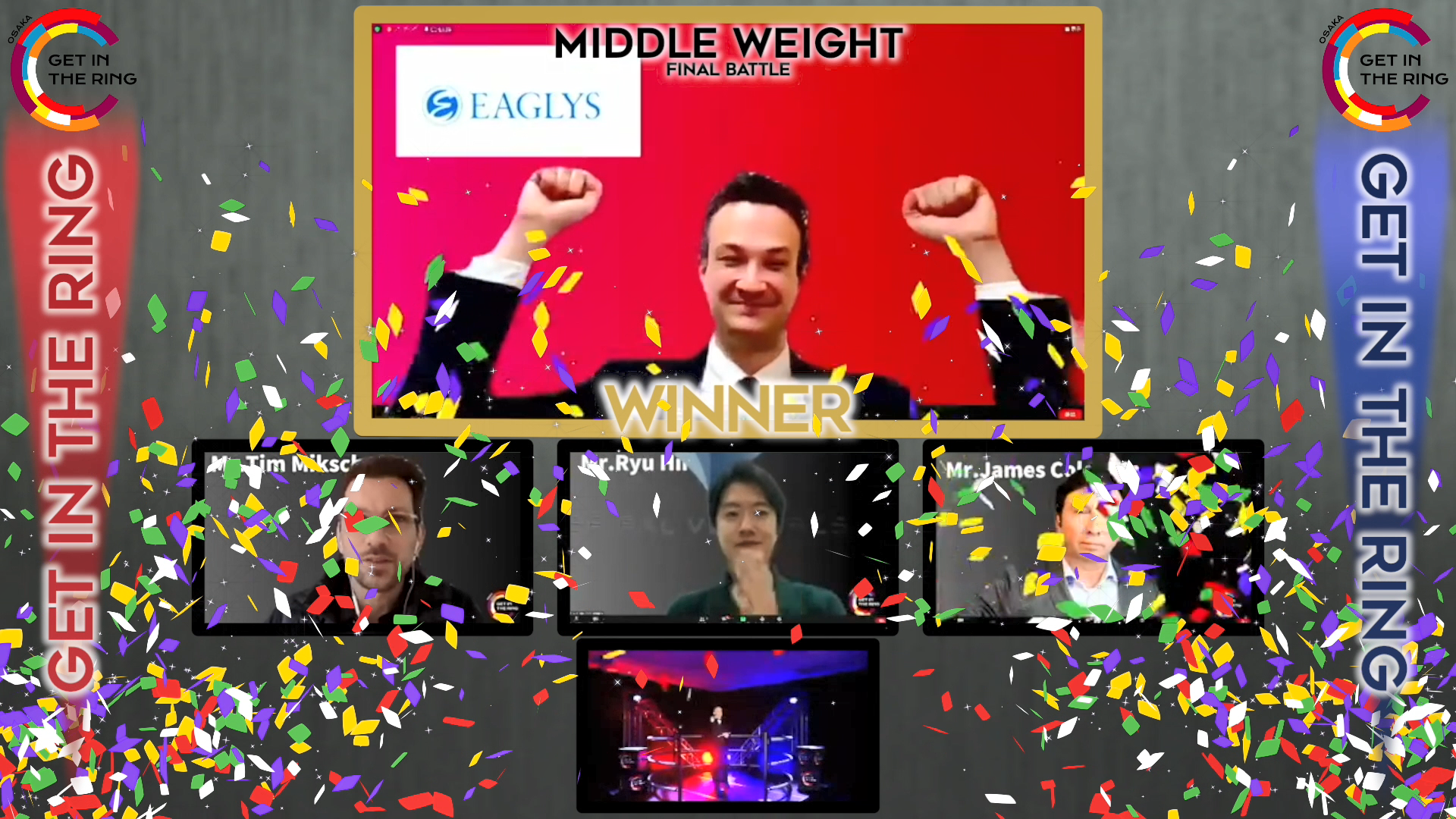 “I am feeling great. It’s the second time that we’ve joined and we didn’t previously win. But our company has grown and we’ve managed to double our revenue compared to last year, which is kind of impressive, especially during current times with the coronavirus pandemic. We are now looking to expand overseas. The US is a big market, and the EU has a favorable legislative environment for privacy protection.” – Michal Kiezik, Global Director

builds machine vision software that uses deep-learning for industrial automation with a focus on picking technology.

develops a voice-based mobile phone service, facilitating use of a range of software without the need for the internet or IT literacy. 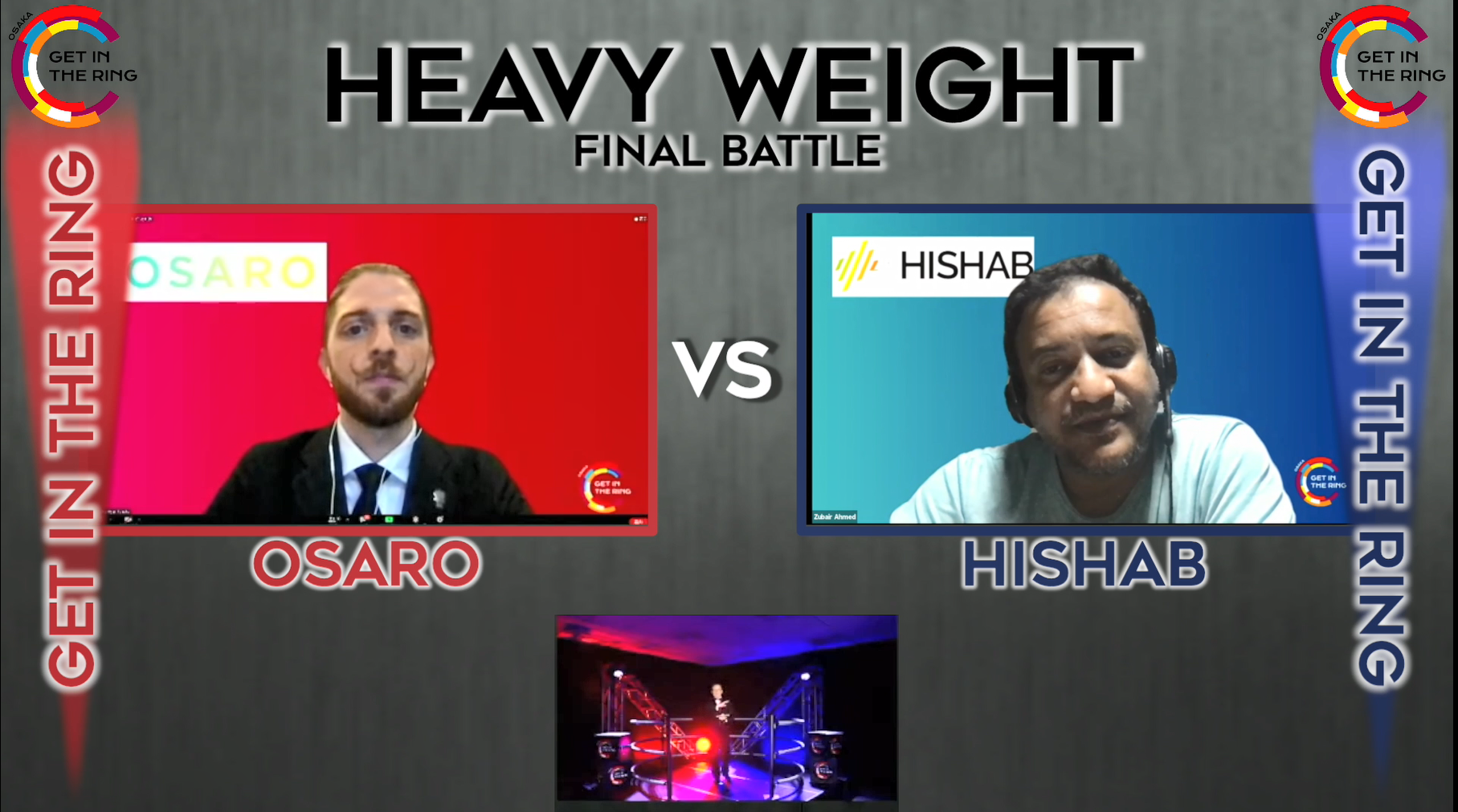 3.5 billion people are digitally illiterate, but it’s time we stopped forcing people to adapt to technologies but adapt the technologies to us, said Zubair, CEO of Hishab as he launched into an explanation of their telephony service. Noting that their system currently records over 570 million dollars of retail transactions, and they have 70 patents in 27 countries, he swung some impressive stats, claiming that the voice data they generated came to twice that of Amazon and Google Home combined. TEPCO is a customer and eight major retail banks in Bangladesh are using their telephone service. They are currently looking to partner with system integrators to license and patent in different countries, with talks with telecoms operators in India and Japan underway.

OSARO’s Ryan was quick to counter. Their deep learning software is loaded into the system instead of relying on a camera, acting like a human eye, and enabling the robotic arms to accurately pick clear reflective and deformable items that were previously a challenge. Through deep learning, it can adapt to any product changes easily, and there is no need for item pre-registering, saving a lot of time. Given that the warehouse automation for parcels distribution and manufacturing is projected to reach almost 250 billion dollars by 2024, Ryan argued that OSARO is well-positioned to expand. They are currently partnering with major system integrators and Japan, and maintain strong relationships with several major robot manufacturers, strategically allowing them to be “agnostic’ in the field.

During Q&A, both faced some tough scrutiny. “I’m going to ask some provocative questions.” said Tim, before asking Hishab why they weren’t yet a household name if they were as successful as they claimed. CEO Zubair welcomed the question, explaining that their strategy was to conquer Bangladesh first before expanding. With the coronavirus pandemic driving up usage of their software, their revenue has shot up, allowing them to focus on market expansion. Ultimately, it was this solid business model that saw the judges crown Hishab champion, praising their clarity of purpose and their mission in tackling the digital divide. 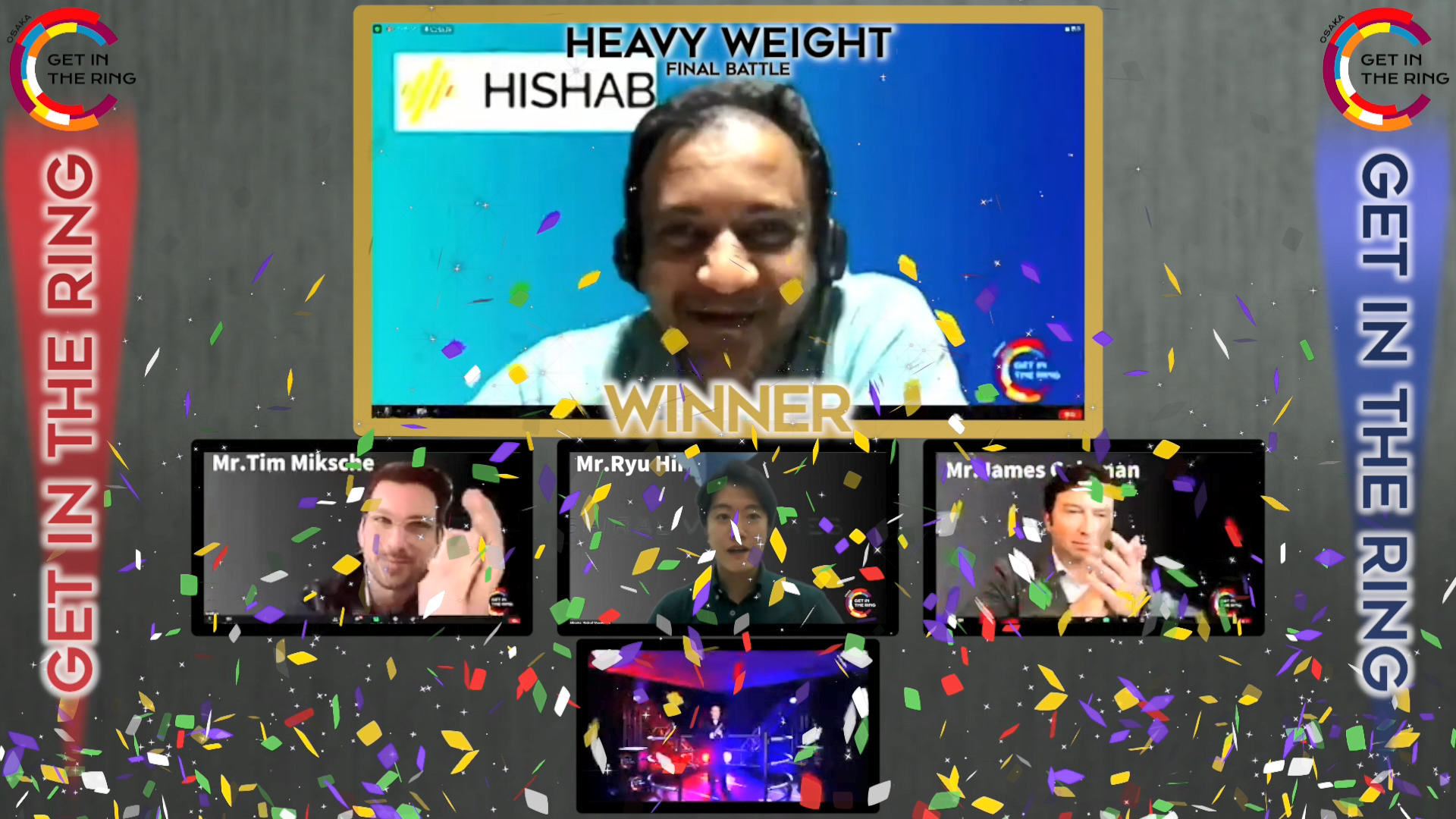 “For a very long time, we have forgotten about the 3.5 billion people who are digitally challenged and now the pandemic has pushed us – all of us – to adapt to technology. But these 3. 5 billion people aren’t ready. They need a solution that can help mitigate that gap between technology and adapting to a new reality. That is where we saw us filling that gap. Any person can use any software solution without the need of having to learn anything. That is really what has kept us inspired.” – Combatant: Zubair Ahmed, CEO

GITR Osaka’s three winners journey doesn’t end here. They must ready themselves for the fully online Global Meetup 2021, where they will have the opportunity to talk with GITR’s global partners with a view to developing their businesses and striking some deals. Watch this space, as the battle continues. 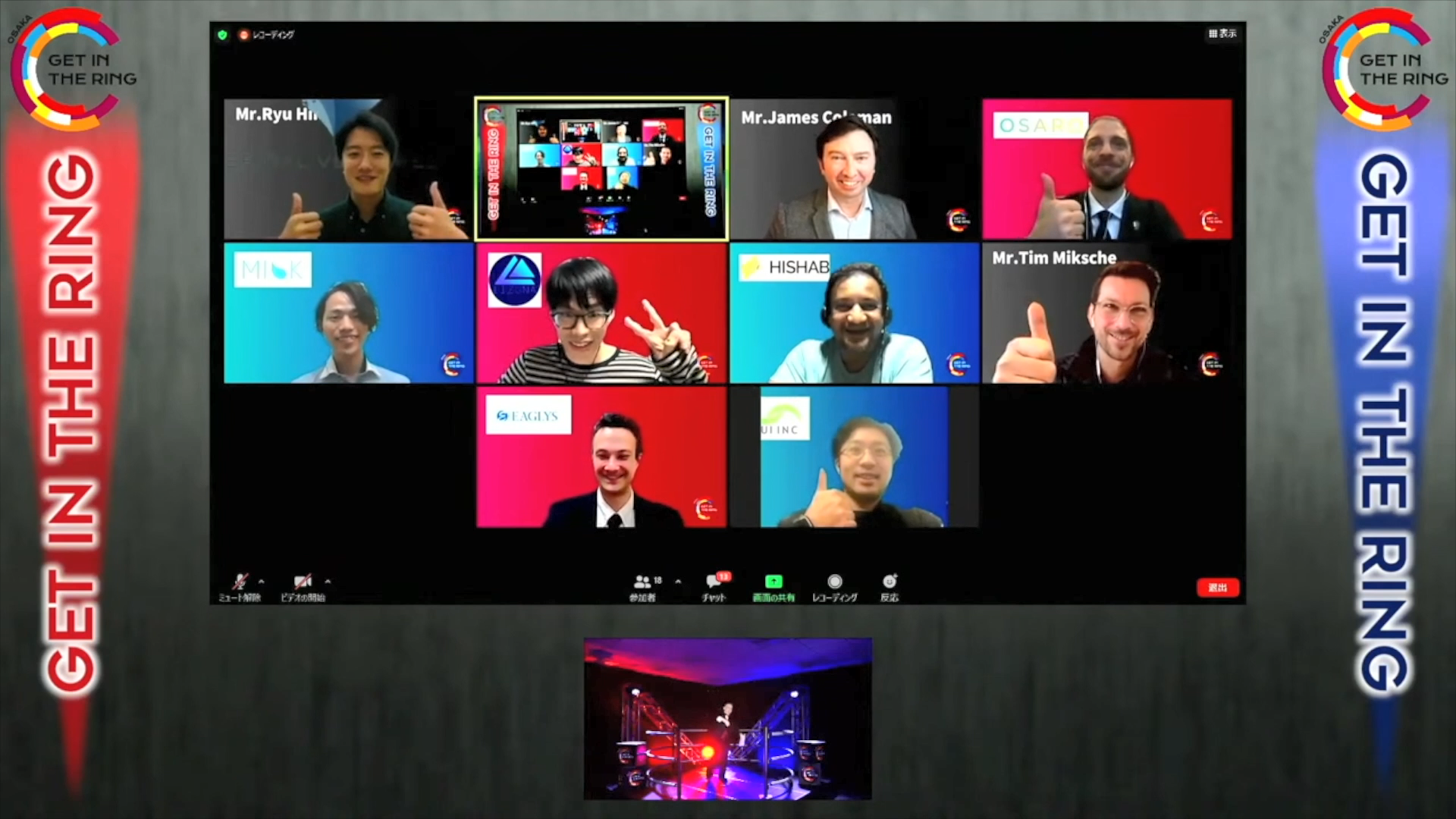